In 2001 I authored a report, The State of African-American Homeownership in Oregon, 2000.

Detailed demographic tenure data apparently will not be available from the 2020 census until 2022.

So, in the interim I went back to ACS 2019 data and re-constructed the 2000 table to show the 2000-2019 changes in the number of African-American homeowners and renters in these five cities and in the black homeownership rate. I added to that table to show how statewide counts have changed, including subtotals for the rest of the state outside of these 5 cities.

There has been a dispersion of black homeowners and renters outside of those 5 cities, and especially the City of Portland. In 2000 Portland had 73% of statewide black homeowners; in 2019 that had declined to 45%

In 2 of the 5 cities (Eugene and Beaverton), the black homeownership rate increased.

Outside of the City of Portland, the Black homeownership rate increased by 15% from 34% to 39.3%.

Despite these increases it's important to keep in mind that the Oregon 2019 ACS  has the White, Non Hispanic homeownership rate at a MUCH higher 66.2% 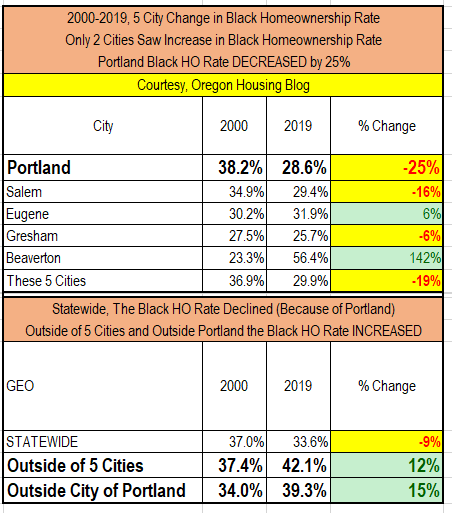 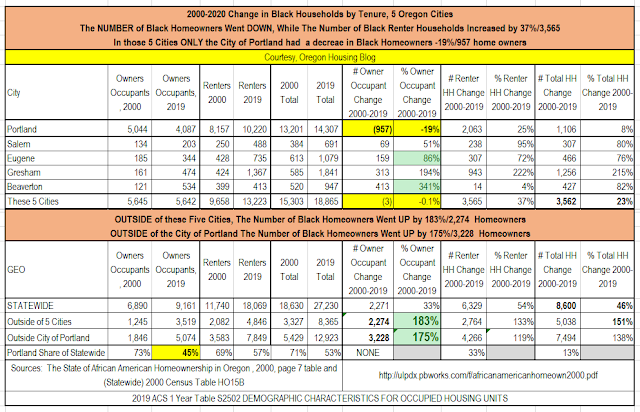