I have prepared the 4 page PDF file HERE and embedded below which summarizes and expands the March 31 data at the state level.

Some observations, using Oregon as an example: An estimated 6.356 seriously delinquent loans, with an unpaid loan balance of $1.3+Billion.

Nationally those 28,009 census tracts had a total of 762,260 seriously delinquent FHA loans; the outstanding loan balance for those loans was more than $126 BILLION.

Note that these counts and loan balances do NOT include seriously delinquent loans in census tracts with 1-10 serious delinquencies. There are more than 37,000 of those census tracts nationally and 523 in Oregon alone.

The map of census tracts with 11 or more serious delinquencies is HERE and embedded below. (It may take a few seconds to fully load so be patient).

In my prior post I provided counts of Public Housing and Voucher counts by HUD region with a breakout of those counts for the now 80 approved HUD MTW agencies.

In the 3 page PDF HERE and embedded below I breakout those counts by state.

The listing starts with Vouchers, then Public Housing, and then the combination of both.

I'm confident that this is the first public posting of these counts. I used unit counts from the PHA data found in the HUD Picture of Subsidized Housing annual publication HERE.

Latest MTW Expansion Includes Washington County and Brings MTW Share of ALL US Vouchers to 16% and 10% of All Public Housing Units.

The Housing Authority of Washington County [HAWC] was one of the agencies approved for MTW participation; Home Forward is the only other MTW agency in Oregon.

HAWC's approval for a tiered rent structure will extend regular income reviews to 3 years and band tenant rents by $2,500 income increments to simplify the rent setting process. The HAWC application, with many more details, is HERE.

I compiled a count of public housing and HUD voucher units within the 80 MTW agencies and put together a summary by HUD region in a PDF file HERE and embedded below. [The unit count data source was the 2020 HUD picture of subsidized housing data found HERE].

I recently discovered that HUD has posted updated  March 2021 loan balance information on FHA current loans down to the census tract level.

I downloaded the data and aggregated it to the county level in the table pasted below. (The loan counts and mortgage amounts somewhat understate state totals because about 60 census tracts had their data suppressed because the count of loans was 10 or less).

Some observations (all $ are rounded) 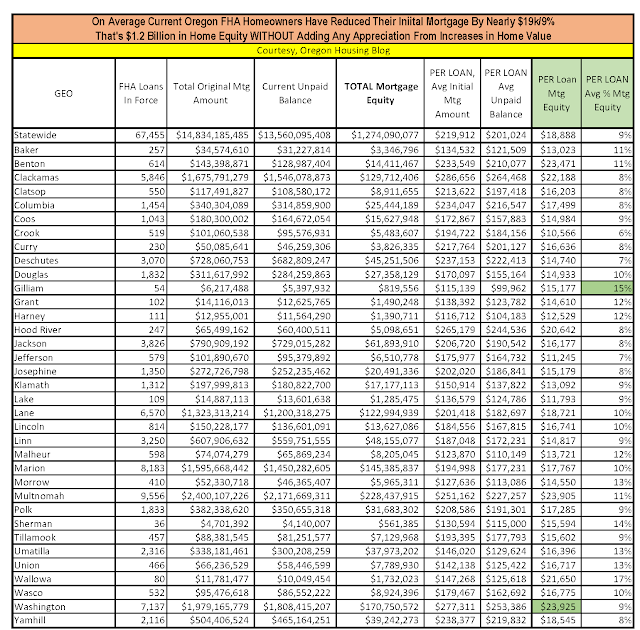