As I suspect may be true for others, I previously (and erroneously) assumed that most Oregon unemployment insurance recipients were getting close to the current maximum weekly benefit of $673.

With the maximum and minimum weekly benefits scheduled for a yearly change after July 4th (see my prior post HERE) it's a good time to look more carefully at the range of unemployment insurance weekly benefit amounts (WBA).

The Oregon's Employment Department quickly responded to my request and provided me with 1st quarter 2021 data on the range of WBA amounts for which nearly 58,000 initial claimants were found eligible. Note this is for the regular program only and does not include PUA or PEUC, nor does the WBA include the $300 current FPUC uniform supplement.

The data for initial claimants shows:

This means that the increase in minimum and maximum benefit amounts in July could potentially impact the WBA for 40% of new claims filed after July 4th (if this distribution pattern continues).

The table and graph pasted below show the details of this 1st quarter WBA distribution pattern, without FPUC.

Adding the temporary $300 FPUC brings total full time annual income to $36,608, the equivalent hourly wage to $17.60, and an affordable monthly housing expense of $915. 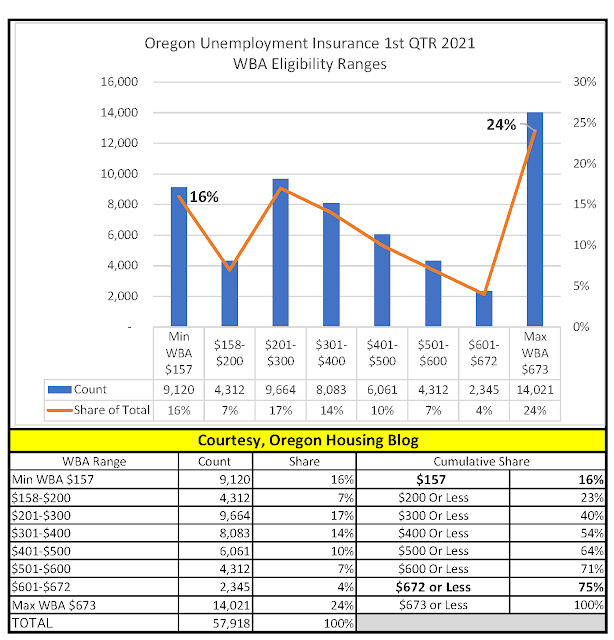