Oregon Unemployment Insurance Rates for 2021 Will be Out Soon; An Example of Possible Impacts.

Oregon employers will soon be advised of their unemployment insurance rates for the coming year starting January 1st. (The statutory deadline to provide rates to employers is November 15).

With the record amount of unemployment insurance claims and the multiple new CARES act programs there is more than the usual amount of uncertainty surrounding base wages and base rates and the experience based rates that individual employers will pay.

Oregon employers and rates are helped by an outstanding, # 1 in the country unemployment insurance trust fund balance, which currently is $4.045 billion despite record payouts of more than $5.3 billion in the last seven months.

Unlike California and Washington state Oregon will not need to borrow money and unlike Idaho Oregon did NOT divert $200 Million in CARES act funding to their unemployment insurance trust fund..

From a recent briefing the image pasted below shows all the programs that OED says will NOT count against employer rates. 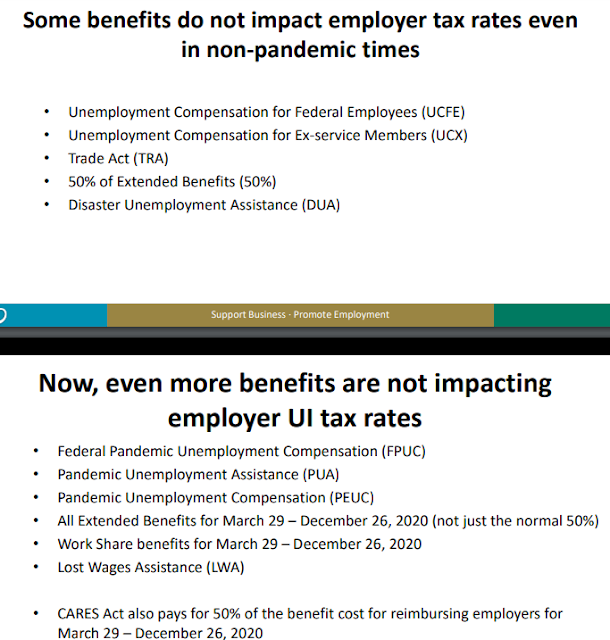 1. Wages Subject to the Tax

2. One  Rating Schedule Change Example If Wages Subject to the Tax Stay the Same

Oregon uses schedules to adjust annual minimum, maximum, and new employer rates. The current schedule is schedule 2 from ORS 657.463. If the schedule used slips to schedule 3 or higher this would increase base rates for all employers.

IF the schedule slips to Schedule 4 [the same schedule in effect in 2016 and 2017] AND if wages subject to the tax stay the same this would mean an increase in unemployment taxes of $211 at the minimum and new employer rates and no change at the maximum rate..

Compared to 2011 however the actual tax at the minimum would DECREASE by $205, at the maximum increase by $529, and increase for new employers by $29.

The table below show my calculations of the changes in rates and costs for minimum, max and new employer. It does NOT however compare the changes at the AVERAGE rate (DOL estimated and actual average tax rates by state and year can be found HERE). 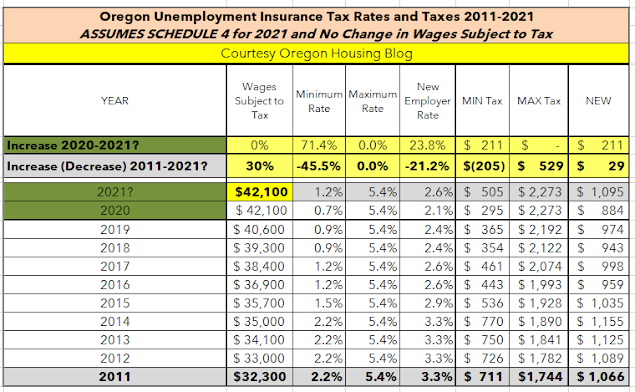 I have also included a graph below that show the minimum and new employer tax rates from 2011 to 2021, assuming schedule 4 is used for 2021. 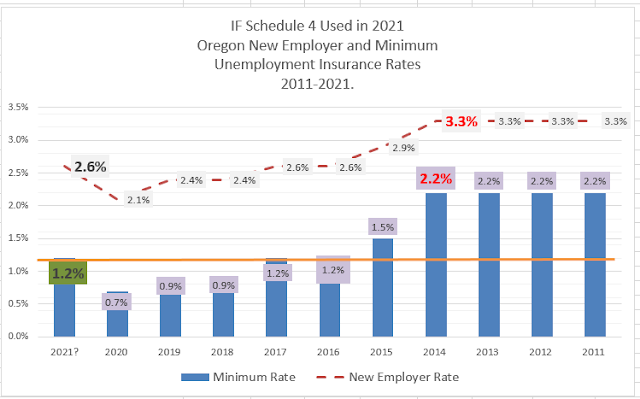 C. It's all Relative

Whatever the changes in rates occur, even with an increase Oregon UI tax rates may compare favorably to adjacent states. And tax rates are only part of the equation; taxes should also be compared relative to the maximum and minimum benefits provided.