It's clear to most that HB 3389 is on a fast track to approval in the Oregon House and likely in the Senate also.

I confirmed with OED that tax cuts for employers by biennium would be: 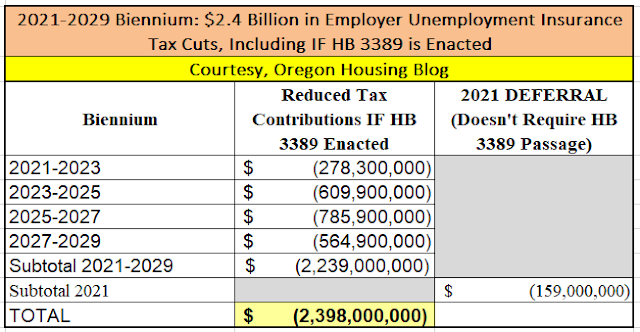 1. There is one bill that I am aware of that increases benefits for workers using UI trust funds, HB 3178. It's cost is limited to ONE year, $75 million.

2. HB 3389 includes new language that permits that trust fund to include: "All other moneys or property, including securities, of any kind whatsoever received for the fund from any other source whatsoever.". Among other possibilities this provision would permit the issuance of bonds, likely in lieu of borrowing from the federal government.
Idaho is one of several states that have done so, going back several years. The 2011 story HERE says that Idaho issued bond debt after cutting employer contributions to the fund, only to increase employer contributions later.
[The 2021 study HERE examines alternative methods of funding UI trust fund deficits].
Originally created and posted on the Oregon Housing Blog.