HB 2006 was enacted in 2018 and requires Oregon large cities to report housing permits and production annually to DLCD. As was the case in past years I was able to get the data from DLCD and combined 4 years of data to get annual and cumulative production of all housing types. [ I focus on PRODUCTION, not permits as there are multiple sources of permitting data but this is the ONLY public source for production data I have found].

At some point I will publish an Excel file with all the permitting and production data (including multifamily that is largely excluded from this report) but for now I wanted to focus on counts of total production and missing middle production.

The 22 page PDF file HERE has that data. The first two pages are graphs showing annual housing production including total production and expanded missing middle production and the share of that production came from Portland metro cities and the City of Portland. [I have pasted the annual production graph below]..

Counts for each missing middle unit type are included for all cities and all years as are counts of TOTAL SF production, not just detached.

There are a total of 56 cities with reported data. Because cities are added based on population, not all cities reported in all 4 years.

Despite a February deadline several cities do not report data timely. For 2021 I count 6 cities whose reports had not yet been received, but most were small enough that they would not significantly impact production and especially missing middle production.

Production Totals and Portland Metro and City of Portland Share of Totals.

Rates of Production vs. Total Units in the 2020 Census

PDF file layout is landscape and legal size. I had no difficulty in printing letter sized after "shrinking oversized pages" in my printer preferences. 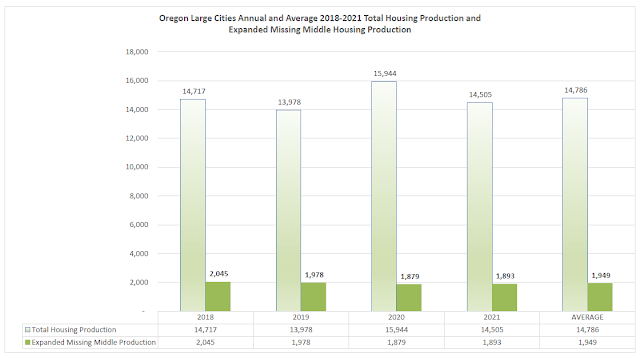