That happens every year, but this  there are some BIG changes that may have flown below the radar.

The annual income limit change process is not transparent and involves IRS and  detailed calculations and policy choices from each state housing finance agency.

This year I expected to see increases because of big increases in HUD median family incomes that are used in the process of establishing annual income limits for the bond program.

There are now 13 rural counties that have income limits at the same level as the Portland metro max income limit, $149,100.

ALL of the area within these 13 counties are designated as "targeted" and are permitted to have higher income limits. (In the 5 county Portland metro area only the City of Vernonia and select City of Portland census tracts are targeted areas, all of the other areas in these 5 counties have lower income limits, $130,561).

Since median family incomes are lower in these 13 counties than in the Portland metro area, a greater share of the population in these rural counties will be potential users of the Bond program  even if the maximum income limit is the same.

Targeted areas also do NOT require the purchaser to be a first time homebuyer--this further expands the eligible universe of potential users of the Oregon Bond program in these 13 rural counties.

In 12 of those counties the Oregon bond income limit is more than DOUBLE the HUD 4 person median family income.

After looking at HUD special household income tabulations for rural counties in Oregon I conclude that is likely that well over 90% of ALL households [renters and owners] in these 13 counties have incomes below the Oregon Bond income limit.

This expanded eligible universe is substantially greater than the 80% of median family income that is often cited as the target demographic for the Oregon Bond program.

The Portland Metro HUD Median Income Is More than Double than the Wheeler County Median Income, But Has the Same (or less) OHCS Bond Income Limit.

Comment: Because the bond program also has purchase price restrictions it's not clear what the impact of these higher limits will be.

There is a possibility these higher limits might be a benchmark for use for the long delayed Flex loan program, but at that point that is just speculation.

The chart pasted below shows the detailed comparisons for these 13 counties along with the Portland metro income limits. 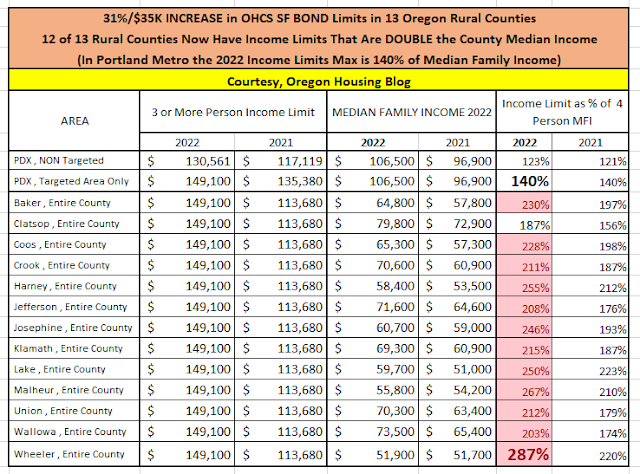