The Oregonian had a front page Saturday story HERE that says that OHCS is asking for reallocation of funds from Treasury because it has reached the limit of its Emergency Rental Assistance allocation from Treasury. The story says:

Oregon Housing and Community Services said that it has allocated nearly all its $289 million of federal emergency rental assistance.

These are the issues I have with the story:
1. OHCS Treasury Emergency Rental Assistance allocations total $361 million not $289 million.
To date OHCS has received 100% of its ERA 1 allocation and 40% of its ERA 2 allocation, a total of $267 million. Following statutory provisions and Treasury guidance OHCS can now request (or may have already) the 60% remainder of their ERA 2 allocation-$94 million. (The statute for ERA 2 says that requests for the remaining 60% of ERA 2 funds can only be requested/approved by Treasury after 30% of  total ERA 2 funds have been spent).
With the $94 million remaining ERA 2 allocation OHCS allocations for ERA 1 and 2 will total $360,826,176, while the Oregonian story reports only on the use of $289 million.
The press release from OHCS HERE acknowledges their $360 million total ERA allocation, but the Oregonian story does not.
Neither the press release or the Oregonian story report who and what non-rental assistance activities are being funded with the remaining $71 million/20% of the total $360 million. [$360 million-$289 million [from press release]=$71 million/$360 million= 20%.
My understanding is that Treasury guidance allows, but does not require 10% each for ERA 1 administrative and housing stability services, and that ERA 2 increases allowable admin expenses to 15%.
At those levels, I count potential spending for admin and housing stability services for 7 grantees getting direct Treasury allocation at $37 million, so the statewide total could be $108 million + for admin and housing stability services.
Who is getting 20-25% /$108+ million in total Oregon ERA funds and what it being spent for seem like important questions.
2. OHCS MAY ALSO be requesting a reallocation of ERA funds from other ERA grantees. Treasury guidance on reallocation criteria is not yet complete and could include reallocations within the state, including 7 Oregon local grantees that received direct allocations from Treasury.
This could mean no net increase in ERA resources in the state.
Since Treasury posted a required reallocation request form on October 25 OHCS should be able to provide a dated copy of their completed form.
Oregonian Story Also Doesn't Include $165 Million in Direct Local ERA Allocations, Bringing Total Oregon ERA Allocations to $525 million.
That $525 million is $136 Million/ 82% More than the OHCS $289 Million in the Story.
Missing from the Oregonian story is any reference to the direct TREASURY ERA local allocations to 6 counties and the City of Portland which total another $165 million. These allocation bring total Oregon ERA allocations, (excluding tribal allocations of another $21 million) to $525 million.

Table with Oregon OHCS, Local Government, and Tribal Government ERA allocations.
The information on Oregon ERA allocations has been out for months, including subtotals with the 40% of ERA 2 amounts. The table below is from my July 6, 2021 blog post. 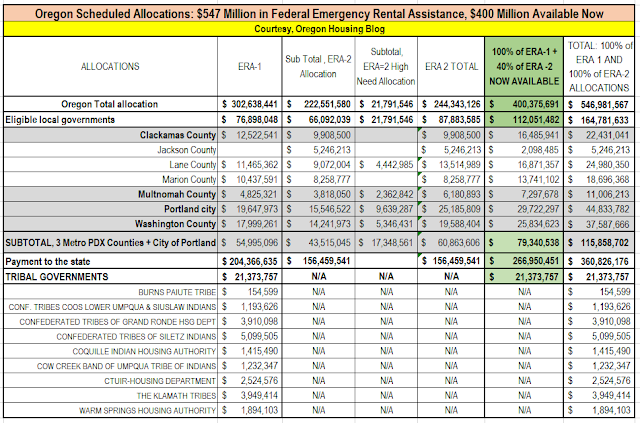