CORRECTION: Oregon OHCS AND Local ERA-1 Grantees: To Date, ONLY ONE (OHCS) of the Responses to My Public Record Requests Have Asked for ADDITIONAL Reallocated Funds. Two Have Improvement Plans.

I have corrected my post from last week below to acknowledge that through MY error I had NOT sent the public records request to OHCS, but found it in my draft folder after OHCS reached out to me.  OHCS expeditiously provided me with their certification and their request for funds.

I have apologized to OHCS for this error, and have corrected the text below accordingly.

Last Monday I made public record requests to six Oregon local governments who received direct allocations of $76,898,048 million in first round Emergency Rental Assistance funds (ERA 1). Jackson county was not included as they only were allocated ERA 2 funds.

A day later I made a similar request to OHCS. [THIS WAS IN ERROR, I found the request in my draft folder and OHCS expeditiously provide their certification and request for funds]

My request was for any or all of 3 documents required by Treasury in their October 25 guidance.

The 5 6 responses I received so far came from the Clackamas County, the City of Portland, Lane County, Multnomah County, and Washington county AND OHCS. Still outstanding, but within the statutory time period for response is Marion county, as well as a response from OHCS.

Lane county responded by saying they do not have the referenced records suggesting I follow up with them at a later date. With  the November 15 Treasury submission deadline now past I'm not sure what the issue is but I have followed up with them for an explanation.

EXCEPT FOR OHCS None of the respondents to date have yet requested additional funds from reallocation from other ERA-1 grantees--as of now it appears to me that only the City of Portland AND Multnomah County, and OHCS might be a position to do so.

Treasury Guidance gives grantees until November 30 to make that request.

The City of Portland was the quickest in responding, providing data for both the city of Portland and Multnomah County. My earlier post HERE relied on their response.

Washington county responded on Tuesday and provided the improvement plan required for grantees who had missed the 65% threshold. Note that the threshold percentage includes obligations and not just expenditures. Their plan is HERE.

Clackamas County also responded on Tuesday and also provided the improvement plan required for grantees who had missed the 65% threshold. Note that the threshold percentage includes obligations and not just expenditures. Their plan is HERE.

As I mentioned earlier Lane county responded by saying they do not have the referenced records and I should contact them at a later date. I have followed up with them for an explanation.

I anticipate that Marion county will also have an improvement plan, it's not clear to me if Lane will also. 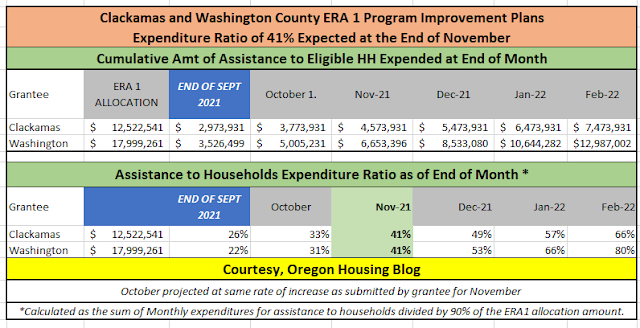 In both counties the data appear to show their assistance to households expenditure ratio should hit 41% by the end of November, up considerably from their 26% and 22% rates at the end of September.

Use of Non ERA 1 Funds

It's not clear to me if either county is subject to losing ERA -1 resources, but I am sure that the hope is that these improvement plans are sufficient to stave off that possibility.

I expect to be adding at least Marion county to this table once I receive their response.

An Appreciation of Prompt and Thorough Responses to Public Record Requests

As a retired government employee and transparency advocate I’m pleased to see several grantees have made prompt and complete responses to my public record requests.