After looking at news coverage and the initial release of the 2019 PIT data the first unreported story I see is the high level of funding that would be available from the Metro services taxes for each chronic homeless person. 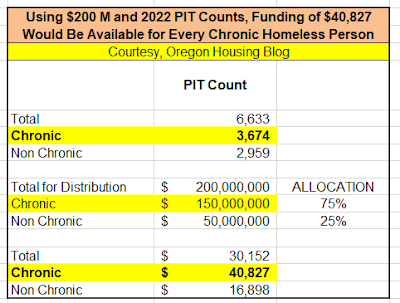 NOTE; This is in ADDITION to the existing homeless spending per person from all other funding sources: HUD, HHS, VA, Treasury, state funding, local funding etc. (In their 2021 local implementation plan Clackamas County totals three county other homeless investments of $112 million, but this may be an understatement).

Other factors, like the location of tax collections, may also impact the distribution.