Last January I created an Excel workbook with 2020 HUD subsidized housing data for Oregon using the HUD Picture of Subsidized Housing database; the blog post with that workbook is HERE.

The 2021 workbook opens to an index to help navigate to specific worksheets. (This requires a macro enabled workbook, IF that doesn't work for you I have posted a a macro free workbook is HERE; its possible that the index will not work as well).

The HUD data dictionary for 2021 is HERE. The Picture data from HUD is the most comprehensive that I have found and I encourage readers to look at the data dictionary to see the wide range of information available.

I set filters in the worksheets to make it easier to zero in on data of interest; in addition I added Pivot tables to the all states and project level worksheets.

So since 2018 there were 2,995 units added but the count of people declined by 485. The decline in people could be the result of different reporting rates, or more assistance going to one person households.

Oregon Continues to Have the Highest Share of HUD Assisted Housing Units Delivered Via Voucher Program.

The Share of HUD Assisted Housing Units In the Public Housing Program in Portland and Oregon  is Very Small.

In Oregon 55% of all HUD assisted units were reported as headed by women, 19% by women with children, and 27% by minorities.

The default view of the Pivot table of project data shows by city and by project name the percentage of units occupied by minorities and headed by women, as well as the HUD spending and tenant paid rent..

In the city of Portland minority head of household percentages in HUD assisted projects ranged from 7% to 96%.  The range of units headed by women ranged from 1% to 88%. 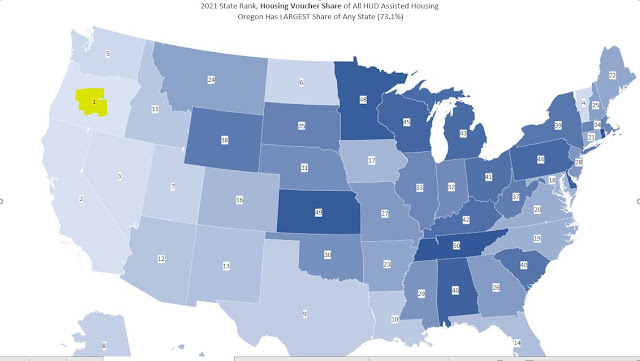